The adults and Young Leaders in my district enjoyed our Christmas meal in January so much last year that we decided to do the same again.

A couple of weeks ago, about 25 of us gathered in the hall where most units meet and had a two-course meal cooked by a caterer and brought in.  The food was very tasty, and there was enough that everyone got to taste all the options if they wanted to, but more importantly the company was excellent.  It was nice to see quite a few Young Leaders there, as well as some “lesser-spotted” Leaders, those who for whatever reason I don’t often see.

Between courses, our District President told some silly jokes and puns, and gave us a numbers quiz where she said a phrase and whoever know the relevant number shouted it out: for example, if she said “Gold rings”, we would call out “Five”.  It was good entertainment, short and not too taxing!

When the Guides were brainstorming what they wanted to do this term, one of their suggestions was going to the beach.  Now, we’re 90 miles away from the seaside and a beach trip wouldn’t be practical this side of Easter, so we decided to banish the winter blues and have an indoor beach night instead.

On what turned out to be one of the coldest evenings of winter so far – we actually got a couple of inches of snow later that night – everyone came to Guides in summer clothes and we cranked the heating up.  One Leader brought a lamp to make things that bit brighter, and another brought long swathes of pale yellow fabric which we laid out on the blue carpet to make a beach.

We split the Guides into four groups – as luck would have it, we had 24 girls that day.  Two groups made sand sculptures in trays, with play sand and yogurt pots… 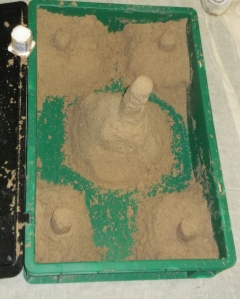 …while the other two groups played a game guessing whose feet were whose.  One group left the room, the other group hid under fabric with only their feet showing, and the first group came back and had to decide together and write down which feet they thought were whose.  Then we did a big reveal to see if they were right.

It showed up that a lot of the Guides don’t know each other’s names, especially the oldest and the youngest.  But most of the teams got most of the answers right, or at least guessed the right people in the wrong order, so I think it was a good way for them to learn names.

One group cunningly all swapped shoes, and another cheated by tickling someone’s feet, which made her giggle and show her face!

Then we swapped over, so everyone had a chance to make sand sculptures and play the game.

Next, we gave the groups a set of split-pin Punch and Judy characters downloaded from here to colour, cut out, and pin together, while coming up with a short play.  While they were getting on with that, the Leaders made “cocktails” with orange juice and blackcurrant squash (for a sunset effect), mint, and glacé cherries.  Well, I didn’t; I praced about taking photos and saying “you have five more minutes, girls!”

Finally, the groups performed their Punch and Judy shows, and had cocktails and ice pops while they watched.  We were running out of time, so they only got two minutes each, and two poor groups spent so long faffing and giggling and deciding what to do that they barely performed anything.  Still, it was quite entertaining for everyone. 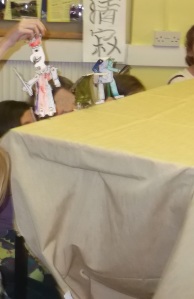 We had planned to play beack volleyball and the “sharks and lifeguards” parachute game, but alas, there was no time left.  Still, a fun evening!