Back in May, I took my Rainbows to a nearby wildlife park. It wasn’t just us: several hundred other Rainbows from around the county were there too, for a takeover day.

In some ways it was a strange day. For one thing, I was the only adult from my unit who could make it, so I put out a call for parent helpers and in the end had 3 mums and a dad with me. They’re all very nice and helpful, but it gave the day a different dynamic from day trips with guiders than I’m used to.

For another thing, the ‘Rainbow takeover’ element wasn’t quite was I expected. Yes, hundreds of Rainbows entered the park at the same time, and we got activity sheets to fill in as we went around, and we saw other Rainbows everywhere we went. But apart from that, we might as well have gone on our own as a unit. There was no big get-together of everyone, and no special activities on just for Rainbows.

Still, the fact is I wouldn’t have thought to organise a trip like this for my unit, so it was really good to have a reason to go there. We had fun seeing all the animals – I especially liked the butterfly house, and got some lovely pictures of butterflies settling on Rainbows’ hands – and of course spending time on the indoor and outdoor playgrounds.

Now that I’ve been and seen that it’s a good day out, I’d consider going back to that wildlife park in future.

The summer term has begun!

For our first meeting the Rainbows went on a minibeast hunt in the garden behind our hall. My helpers “hid” these stones around the area. We got into 3 groups, and each group searched for a different animal.

After a few minutes we counted up how many each group had found. Then they wanted to do it again, so they hid their stones, swapped animals, and did it again.

They looked out for real minibeasts as they went around. We found lots of earthworms, which my Guide helper kindly rescued from being trodden on. 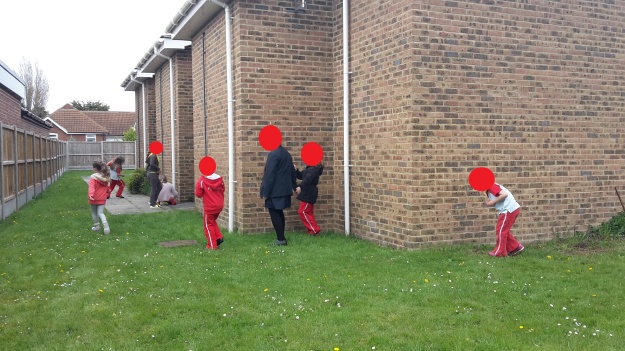 Then we played the game where the Rainbows have to pass something (in this case, one of the minibeast stones) around the circle behind their backs, while one stands in the middle and guesses who’s got it.

I wasn’t sure if they’d get the hang of the game or be patient enough to sit still, but they seemed to enjoy it – they just needed a lot of reminders to keep passing!

Then a few rounds of Duck Duck Goose, handed out the term programme and a few badges, and it was time to go. 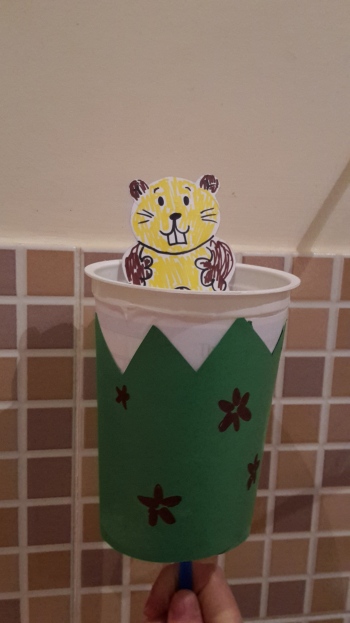 Continuing with our festivals theme, last week the Rainbows learned about Groundhog Day.

Whenever I hear those words, I remember a Guide camp I went to a few years ago. I shared a tent with one of the cooks, and every morning when we woke up the first thing she’d say was “It’s like blooming Groundhog Day” (or words to that effect). Same thing every day!

Anyway, I don’t think any of my Rainbows had heard of it before – no reason why they would have – but they were interested to look at a picture of a groundhog I’d printed off. It occurred to me it would be even better to have a cuddly groundhog . I think I need one as part of my guider stash.

We played the game where the Rainbows run around (“groundhogs playtime”), then crouch down on the floor and close their eyes (“groundhogs go to bed”) and a leader covers one with a blanket, then the others get up (“groundhogs wake up”) and have to guess who’s hidden. They only needed one hint, for one of our newest Rainbows.

Then we made these pop-up groundhogs. The Rainbow Roundabout pack suggests using paper/plastic cups and lolly sticks, but we used big yogurt pots and drinking straws because I have lots of them at home. It’s a relief to have a bit more space in my hoarding cupboard.

The one in the picture is mine, but the Rainbows’ ones were much more colourful, of course. Actually, one girl made such a neat and tidy groundhog that I picked it up at the end thinking it was mine. She had to tell me twice that she couldn’t find hers before I realised I was holding it – whoops!

What was really nice was I posted this picture on a Rainbow leaders’ Facebook group and got not only some replies from other leaders who were doing this/had done it, but also a comment from the lady who put them into the Rainbow Roundabout. She said she got the idea from a Sparks group (Canadian version of Rainbows) and had used it many times over the years. It’s lovely to hear where these things come from. Thanks, Angela!

When everyone was finished we sang a song. It’s possibly meant to go to the tune of I’m a Little Teapot, but it ended up more like Twinkle Twinkle Little Star. Hey, whatever fits.

Wake up little groundhog, it’s time to rise, [pop groundhog up]
Time to wake up and open your eyes.
If you see your shadow, down you pop [pop groundhog down]
For six more weeks till winter stops.

On a different note, I learned a lesson this week: always check the toilets after the meeting. The week before, some Rainbows had made a mess (not deliberately, just because they’re little and can’t reach everything easily), and the Brownie leaders who meet after us had to clean it up. Oh dear. I should have been checking already, but I’ll remember in future. 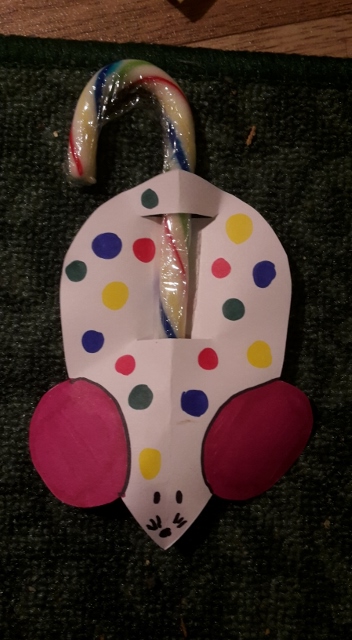 The  candy cane mouse from this Christmas crafty Rainbow meeting, that is. Just so you can see what it looked like. I drew the template freehand as I couldn’t find quite the right thing online, and cut them out (including the slots) so all the Rainbows did was colour them and insert the candy cane. Oh, and write their names on, of course. 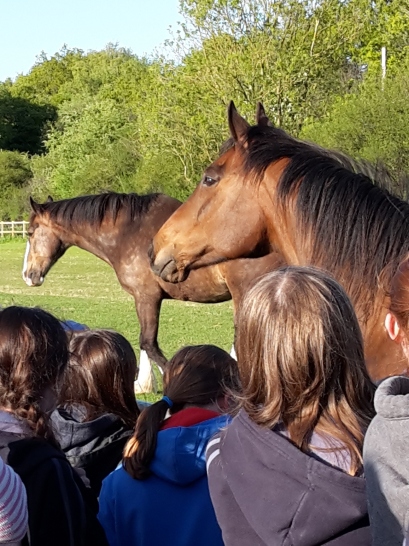 In the summer term my Guides visited our nearest branch of the National Animal Welfare Trust.

I have a friend who works there, and she kept telling me that my Guides should come and visit. So we did.

A very nice member of staff led us around the centre and introduced us to all the animals they look after. She explained to us that they specialise in taking old animals that need a home for the last few years of their life, although they take others too. At that time they had horses, sheep, goats, rabbits, guinea pigs, dogs, and probably more. I was slightly sad as I’d heard a lot about some alpacas, but they’d been rehomed recently. Oh how I love alpacas. So woolly.

The Guides got to stroke some of the animals, and it opened up interesting conversations about the pets they had, or used to have, or would like. They asked some good questions, too.

My favourite part was meeting the member of staff’s dog. He was a big friendly woolly thing and he spent 10 minutes walking round and round the circle of Guides getting lots of petting.

We also learned about the centre’s community engagement and fundraising work. We came away with some little goodies, plus newsletters and flyers about their next events. We’d asked the Guides to bring donations of pet food and toys, and we also gave them a cheque from our unit to say thank you.

Here’s a craft from Pack Holiday back in February.  We had a circus theme, so we made milk bottle elephants.

Dead simple: take a plastic milk bottle (2, 4, or 6 pints all work, depending on how big an elephant you want), cut through the bottom of the handle, and cut around the bottle level with this, so the handle looks like a trunk.  We did this for the Brownies, but older girls could do it themselves.

Cut out semicircles from the base to make leg shapes.  Leave a tail dangling at the back if you remember!  If you keep the semicircles you’ve cut out, you can stick or slot them on to make ears.  Then decorate with googly eyes, tissue paper etc.

You could also do something with the screw top of the bottle, like dangling a bag of sweets inside and screwing the lid over the top of the bag to secure.

Without further ado, meet the Brownies’ elephants.  Most didn’t bother with ears, but they’re still rather sweet, I think. 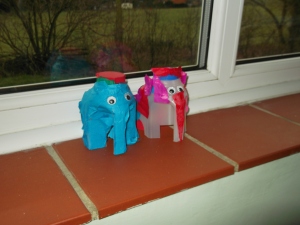 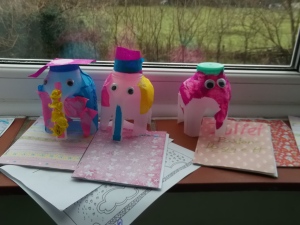 For our last meeting of term, we had two special guests: a guide dog (actually a former breeding bitch for guide dogs who hadn’t been a guide dog herself) and her owner, who spoke about the charity Guide Dogs and the work they do.

This wasn’t part of a badge or challenge that we’re doing, but I think the visit happened through one of those offchances where he got talking to one of our leaders and offered to visit, and they accepted because you don’t refuse when someone offers their services to guiding!  Anyway, it was a really interesting evening and we all learned a lot.

We knew he was due to arrive half an hour after our meeting started, so we started off with a quiz about Guide Dogs.  I made some multiple choice questions using the information on the charity’s website and this unofficial quiz, printed a copy for each patrol, and gave them to the patrols to work on as they arrived.  When they finished the questions, they wrote down ideas for questions to ask our visitor.  He arrived just as we were going through the answers, which worked out well as during his talk he referred to some of the answers, and clarified a few answers which didn’t give the full picture.

I was mightily impressed with the Guides, who sat and listened brilliantly for an hour – I’ve never seen them so quiet!  A lot of this was due to the dog, who was the real star of the evening.  It was very relaxing just watching her snoozing, scratching and pottering around the room.  Her owner said that he’d found having a dog around had great effects: for example, it makes people donate more money and makes school children better-behaved.  The Guides (those who wanted to) got to give her a treat at the end.

Our visitor had a lot to say about the charity, and it made me appreciate just how many people and how much time and money it takes to provide guide dogs to blind and partially-sighted people.  He also had some entertaining stories, such as dogs he had known who were afraid of wheelbarrows and telephone boxes.  His main role as a volunteer now is to do talks like this, and I’d recommend it for anyone interested in learning more about this charity.

The timing was good, too, as the Guides are helping out at the “blind club” at a local day centre in a couple of weeks’ time, so it’s got them thinking about this topic and hopefully will encourage them to come (although dogs are not guaranteed).