I’ve updated my list of nights away with Girlguiding  (because I’ve recently filled in a form that asked for them). It now covers 11 years, goodness gracious. 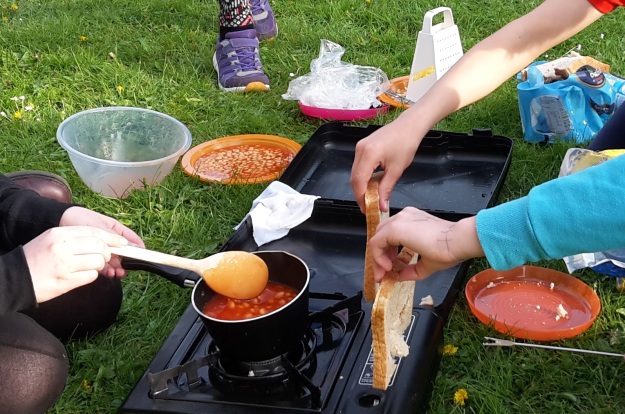 After my bubbly Rainbow meeting, I stayed on to help at Guides (who meet at the same time as Brownies) because they were short of leaders.

There were just 8 Guides (out of a total 12 ish), who were working on their personal safety badge. We went out to the garden – avoiding the wet slippery bits the Rainbows had left – and they cooked baked beans and toast on little gas stoves. I tried to throw safety questions at them while they were cooking, but I may have lost some credibility halfway through, when one Guide said, “Shouldn’t I have my hair tied back?” Oops. Why yes, yes you should.

The Guides ate their snack (safely), washed up (safely), and joined in a game and circle time with the Brownies to end.

The Guides have a different group dynamic from my old, lively, huge unit – not better or worse, just different. It was nice to have a chance to hang out and get to know them a bit.

As a follow-up to our two first aid weeks last term (1 and 2), our Nurse and Former Guide Leader came back to test the Guides for their badge.  This is one of the very few badges we regularly do, the others being Camper and Camper Advanced.

This meeting was much more hands-on for the girls and the leaders than the previous first aid sessions.  The Guides split into four groups (randomly rather than with just their friends, for a change) and Nurse put a leader in each corner and assigned us one thing to practise/test: chest compressions, recovery position, slings and bandages, and first aid kit contents.  The groups rotated around the stations, spending 10-15 minutes on each, and Nurse floated around all of them with questions and advice.

I was on the recovery position, a relief as it’s the thing I feel most confident explaining.  Most of the Guides knew basically what they needed to do, though not without a bit of giggling and self-consciousness, which is fair enough, as it is hard to conjour up what you’d actually feel if you were dealing with an unconscious person, especially someone you know.  They all had no trouble remembering the gory details about what could block the airways, bless ’em.

Nurse and I made sure everyone knew when to put someone in the recovery position (unconscious and breathing), and what its basic purpose was (keep the airways open, stop the casualty from rolling over), and asked them questions like “What would you do once you’ve put them in the recovery position?”, “What information would you need to give to the 999/112 phone operator?”, and “What would you do if they stopped breathing?”.

That took up the whole evening, and at the end Nurse declared that they had (of course) all earned their badge.  Hurrah! 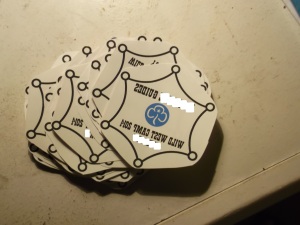 Printed, cut out, and ready to iron onto yellow felt.

A few years ago, inspired by a swap she got, Queen’s Guide Buddy started a tradition of making our own camp badges with felt and print-and-iron transfer paper.  Sometimes she makes them, sometimes I do, and this year it’s a team effort: I designed and printed, and she’s going to iron on and cut the fabric, because I don’t have a working iron.

Incidentally, the neckers are also a team effort: I cut up a king-size sheet and she’s going to hem them with her sewing machine, another domestic appliance I don’t have!

In the run-up to Pack Holiday, I helped at a couple of Brownie meetings to get to know the girls, as I’m not normally their leader.

This meeting ticked off a couple of boxes in my residential qualification book about making sure the girls know about food hygiene and staying healthy on holiday, and it also counts towards the Brownie Skills badge, which the girls are all working on whether they’re going on holiday or not.  Oh, and these skills are generally useful in life…

We started by putting paint on the Brownies’ hands.  First we did a role play of how paint (i.e. germs) can easily spread from one person to the next.  Then they washed the paint off wearing blindfolds, to see if they were washing as thoroughly as they thought.  The first few Brownies missed spots like their thumbs and wrists, but after that they got wise and actually most hands were pretty clean!  It took a while to get through everyone, even with two handwashing bowls on the go, but a lovely leader did some songs and games with those who were waiting/had finished.

After that, we did tooth brushing!  The Brownies stood round a table in Sixes.  Everyone had a beaker of water, and each table had a spit bowl (nice, I know).  First they chewed on disclosure tablets to see how plaquey their teeth were.  They also noticed their tongues turned purple, which was a good opportunity to remind them to brush their tongues as well.  Then they brushed their teeth, and they had to guess when 2 minutes was up and stop brushing.  I was surprised how patient they were: the first Brownie stopped around 1:40, a couple were very close to the 2 minute mark, but most stopped at about 3 minutes.  I called a halt at 4 minutes, when a few enthusiastic brushers were still going!

You are washing up and one Brownie accidentally breaks a plate.

It’s bedtime. Some Brownies want to sleep, but others want to stay up and play.

It’s bedtime and one Brownie in your bedroom feels ill.

One Brownie in your Six is teasing another because she thinks her slippers are silly.

You are helping in the kitchen. A leader is explaining what to do, but one Brownie is not listening.

You have been outside and your shoes are wet and muddy when you come in.

You have been doing crafts and now the room is in a mess with paper and pens everywhere.

We only gave them about a minute to prepare, and then whizzed through the performances, with a little bit of discussion about the situations.  Generally they all seemed to understand and choose a sensible course of action!

That took us to the end.  I did enjoy going to Brownies, as it’s been about 18 months since I was a Brownie leader in another town.  It’s always interesting seeing what’s similar and different between packs – for example, this pack doesn’t sing “We’re Brownie Guides” at the beginning of meetings, but (like all Brownies I’ve met) they love wink murder and Chinese whispers.  I’ve been able to put a few names to faces – maybe a third of the pack? – which is a start.  Roll on pack holiday!