This week we had our second Go For It night of the term.  The patrols got started on their planned activities as soon as they arrived.  They were:

Only 4 patrols tonight: somehow one patrol only had one Guide attending, so she joined in with another group.

If I’m honest, we as a unit could be more rigorous about Go For Its.  Our packs seem to keep disappearing and some are getting quite old: we still have a few of the first ones, published before the uniform changed and before our youngest Guides were born!  The activities are still good, but they just don’t look so attractive any more.  Most of the patrols didn’t know the name of the Go For It they were working on, and none have done three activities as I think you’re meant to.

So: we could do better at explaining the idea of Go For Its, providing up-to-date packs, giving the Guides enough time to prepare three balanced and varied activities, and giving them a reward (card/badge) at the end.

On the up side, they were all happy in what they were doing, even if not particularly challenged.  We have a new helper (huzzah!) who is keen but completely new to guiding and a bit shy with the girls, so I took her on the rounds of the patrols and asked them to explain to her what they were doing.  The other leaders got on with some camp planning and counting fundraising money – an advantage of having a less leader-intensive meeting.

The Guides did their own activities for 50 minutes, then we all played the quiz that one patrol had written.  It was good and educational (did you know that Polo mints were originally manufactured in York?) and I liked that there were edible prizes.

After that we played an active game.  It started out as what I call “the hat game”, where you have two lines facing each other, each girl numbered, an object (traditionally a hat but we used a fuzzy dice) between the lines, and when you call out a number, the two girls with that number have to race to be the first to pick up the dice and throw it into a target (a mixing bowl in this case), and win a point for their line.

At Unit Leader’s suggestion , we made it more active by setting up a goal (a chair) at each end to kick the dice into, like a game of mini one-a-side football.  This was much better as the competition wasn’t over as soon as one girl got control of the dice.  We also called “swap with [number]” if a goal wasn’t scored quickly, to keep them on their toes.  The Guides enjoyed it – there was lots of shouting and cheering – so I must remember it for another time.  New Helper kept the scores and announced them at the end.

Often at indoor meetings, we’re so busy doing the main activity that we don’t get time for a game, so it was really nice to do it tonight.  I think it’s especially good for girls who have recently joined us from Brownies, as they play lots of games there, so it must be a hard transition to suddenly not do so many.  But everyone enjoys a good play, really!

After last week’s meeting, which needed quite a bit of preparation and hands-on leading, it was nice to have a night when the patrols planned their own activities and got on with them.

It gave us leaders a chance to catch up, talk about events coming up, staple together some fundraising packs, look at some old photos, do camp admin, and check on craft supplies, so that was quite productive.  It was one of the very rare meetings where I was surprised time was going so slowly, as usually we’re always in a rush to finish on time!

The Guides mostly did a fine job with their Go For It activities.  They included drawing the world of the future: 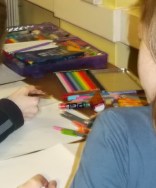 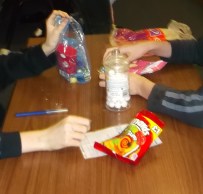 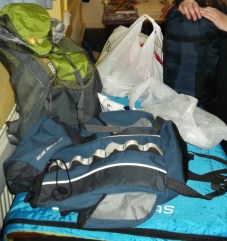 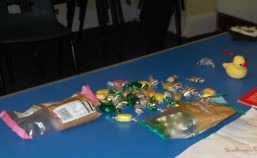 And a murder mystery play which, unusually, had a beginning, middle and end.  Good work, Guides.  The only not-so-successful one was meditation, which didn’t happen because the girls bringing the equipment weren’t there; but we found that patrol some crafts to do instead.

This week at Guides, our Young Leader ran an activity on the Promise, which counted towards her Leadership Qualification.  The Guides drew round their hands on green paper, wrote the Promise on one side and examples of how they could keep it on the other side, cut them out, and stuck them (like leaves) to a tree trunk that YL had drawn.

It was simple and good: the girls seemed quite happy sitting, writing, discussing the Promise (amongst other things!) and in some cases getting very decorative.  We looked at the Promise at the start of last term (along with most other units in the country, I expect), but it’s good to have a refresher, especially as we have a few new Guides who might be making their Promise this term.

Then we asked the patrols to come up with ideas for guidelines (unit rules, code of conduct, whatever you call them), as we realised we hadn’t renewed them for over a year.  The patrol leaders got together and made a final version – again, we haven’t had a patrol leaders’ council for well over a year, or official patrols for that matter!

While they did this with two leaders, another leader and I introduced a selection of Go For Its to the rest of the Guides, and they started looking through them and choosing what to work on.  After the patrol leaders returned, they only had about 10 minutes to plan activities for 2 weeks’ time.  It felt a bit rushed, but we were running out of time, and we could make some time to look at them again next week if necessary.

Looking through our collection of Go For Its, only the more obscure ones seemed to be there – we leaders wondered what had happened to Chocolate, Globalistic, Passion for Fashion, and others that we definitely used to have.  Maybe worn to pieces or borrowed by another unit?  Anyway, the ones we found still have lots of good activities (even if some show Guides in the old uniform, i.e. are at least 10 years old, i.e. are probably older than some of the Guides). 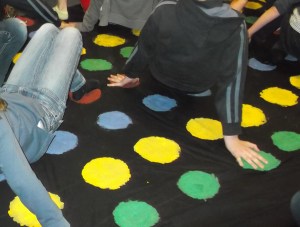 We finished with a game of Giant Twister, which was just what was needed after an evening sitting at tables.  One of the leaders has an amazing homemade mat, which is the size of about 6 normal mats and takes up most of our meeting space!  Some of the Guides are very agile, and in the end (after adding instructions like “nose on red” and “left ear on yellow”) we declared 3 winners.